The outlook for aviation in South America

Although Bolivia’s GDP has increased markedly in recent years following the nationalization of the country’s hydrocarbon sector, growth in this capital-intensive industry has not led to significant job creation. However, income generated from international tourism could complement the energy market. The Lufthansa Consulting market study shows that there is definitely potential to expand the Bolivian tourism sector. In 2014, 1.4 million passengers travelled from Bolivia to destinations within and outside the South American continent. The demand for flights, particularly from Asian countries, is growing exponentially. Each year, 300,000 visitors from countries such as China, Japan and South Korea travel to Bolivia.

The Lufthansa Consulting study predicts that the creation of an aviation hub in Bolivia will boost tourist numbers substantially. A positive side effect would be the generation of new jobs in the country. Furthermore, a new Bolivian trans-Pacific airline would mean that 80 percent of the amount that Bolivian travelers currently spend on international flights would flow into Bolivia’s economy rather than strengthening other South American economies.

Due to its geographical position in the center of the South American continent, Bolivia is predestined to grow in importance as an international trade distributor and open new commercial paths by founding a trans-Pacific airline.

Liége Emmerz, Lufthansa Consulting’s Partner responsible for the South American market, and Managing Consultant Maciej Mazurowicz recently presented the results of their study and the potential for the country’s aviation sector to the Bolivian public authorities in Santa Cruz. As was to be expected, the market study has attracted strong media attention in Bolivia. One of the country’s most important business journals, Cash, recently published a detailed article about Bolivia’s opportunities in the aviation business. You can read the full story in Spanish in our download section. 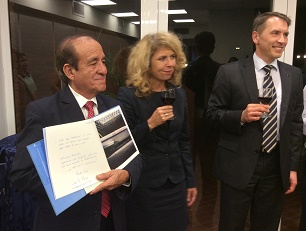