In good shape for the Olympics and for future challenges

Right on track for the 2016 Olympic Games in Rio de Janeiro! Brazil’s second-largest airport, RIOgaleão International, is well prepared for the Games: 23 May 2016 marked a new era in the airport’s history, when a brand-new passenger terminal with 26 boarding gates was successfully delivered to the public.

Like other airports in the country, RIOgaleão has extended its existing terminal capacity so as to be able to handle the predicted increase in passenger numbers, and also to play its part in the transfer of passengers traveling to and from the Olympics and Paralympics from August 2016.

Lufthansa Consulting and Munich Airport supported RIOgaleão and CCG (Consórcio Construtor Galeão) during the Operational Readiness and Airport Transfer (ORAT) project to ensure that the new Pier Sul passenger terminal and the rehabilitated Terminal 2 would be up and running on the opening day and beyond.

The terminal operations and airside operations specialists were responsible for integrating, leading and coordinating the core process teams at RIOgaleão and all the stakeholders, as well as for setting up and driving the airport’s complex operational readiness program and opening strategy.

The trial logistics and operations team experts, meanwhile, were in charge of coordinating and organizing such issues as system training, relocation planning and participation in various trial operations.

The first phase of the six-month ORAT project focused on establishing integrated core process teams to ensure that all the members involved have the same level of information, as well as a clear and common understanding of their duties and responsibilities. These teams evaluated core processes and operational activities in regular meetings and workshops to systematically set up and monitor the necessary activities until the opening of the new airport facilities. This included the creation of so-called “cockpit charts” which contain solid task definitions, their ownership and deadlines for task completion. This approach ensures that all parties involved are able to operate the new Pier Sul terminal at RIOgaleão effectively, that the right systems and operational procedures are in place and that staff are confident in their roles and can respond to any situation at any time. It also requires a detailed understanding of the facility and the related airside infrastructure and systems.

In parallel, the trial logistics and trial operations team was instructed to set-up the basic functional and integrated trials.

During the second phase, the ORAT project team concentrated on the setting-up and effective coordination of the trials in order to test and simulate the modified or newly created operational procedures. The trials provided a platform for all airport users to ensure operational readiness on the opening day and beyond. This required all the team members involved to make minor improvements during each trial session to confirm that the established processes and procedures were working well.

Tom Jobim International Airport and the airport community will benefit extensively from the necessary overall airport operations know-how and experience of the ORAT project team, especially in the following areas:

- Bonding the entire airport community and cementing commitment at the top level of the airport operator and each company, organization or governmental authority involved

- Discovering every opportunity to leverage existing and new operational modes with a view to enhancing overall airport performance and the passenger experience, as well as improving quality

Lufthansa Consulting and Munich Airport would like to congratulate RIOgaleão and CCG on its efforts and successful opening, and wish everyone involved all the best for the future. 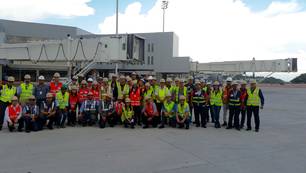 The ORAT project team after its first tour on the apron of new Pier Sul passenger terminal at RIOgaleão International Airport. The participants of the trial operations sessions enjoyed their excellent teamwork during the project.