The Estonian newspaper Eesti Päevaleht conducted an interview with Mr. Stanislav Solomko, Associate Partner and Head of the Markets Russia, CIS, and Baltic States regarding Lufthansa Consulting’s project for Nordica. Read the translated interview below:

The Ministry of Economic Affairs and Communications commissioned an expert opinion from your company, and your general assessment of the business plan of Nordica was positive. Please tell us how you came to this conclusion.

First of all, let’s take a few steps back. Airlines depend on passengers, i.e. clients, just like all other businesses. Air passengers can broadly be divided into two groups: those who are interested in the lowest possible price; and those who travel, for example, between Tallinn and Stockholm every day. The latter are clients who are prepared to pay more for the service they need. Passengers who’ll pay more are the most important ones in regional aviation, which is to say the business model Nordica follows, because no regional airline can compete with Ryanair or Wizz Air in terms of price.

Look at Ryanair: they started out with 11 routes from Tallinn, but if I’m not mistaken they now only have three. That shows that budget airlines don’t work in every region. The Stockholm route is the best example of where Ryanair failed. It wasn’t their business model to fly there three times a day; much less often. But that was Estonian Air’s niche: attracting clients who pay well, like bankers and senior managers – anyone who’s interested in a convenient flight schedule.

This is where Estonia’s new airline, Nordica, should also succeed if they manage themselves properly. I’m pretty sure they will, since Estonian Air was already one of the most cost-effective airlines in Europe. The decision of the European Commission that brought its activities to an end was an unfortunate one. So if Nordica manages to keep its costs under control and focuses on the right segment, they’ll be a success.

I’m not an aviation expert, but it seems to me that most Estonian air passengers look for the lowest price. I’m inclined to think we don’t have that many well-paying clients. Am I wrong?

Well-paying clients fly more, so keeping hold of them is vital. It’s important to note here that a well-paying client doesn’t automatically mean a client who flies in business class. It means anyone who’s ready to pay 50 or 60 euros for a ticket instead of 20 euros for a budget airline, so at least premium-class passengers. Ryanair can be used as an example here again. They only flew to Stockholm three times a week, but one in every three clients wants to fly back on the Stockholm-Tallinn route that same day. That’s why Estonian Air’s schedule, which had three flights a day, was better, and beat Ryanair.

How should Estonian Air have been managed to avoid bankruptcy?

Sure, the Commissions’ decision was lawful, but it’s sad the airline had to pay such a high price. There was no money for the expansion plans made in 2011-2012, but the investment made sense. True, it was very risky. As tends to be the case in business, investments don’t always pay off in the first few years, and Estonian Air’s shareholder – the state – wasn’t prepared for it. Making big investments only pays off fast if the company’s shareholder is rich or the state has oil. Take Qatar, for example, whose airline still isn’t making a profit, but it’s expanded strongly. Their economy’s growing as a result and the country’s on the map as a travel destination. When we look at an airline based solely on its financial indicators, we see one picture. But when we add the benefit to the state, we see the bigger picture, which is a lot more positive.

Both Estonia and Lithuania have seen their airlines go bankrupt. Only Latvia’s done better. Should the Baltic States have one joint airline?

The scope of a larger company would obviously be broader, and by that logic one large company would make more economic sense. But if you look at SAS, which has tried to follow a similar model, their results haven’t been great, as you know. They’re constantly struggling with financial issues. What this means is that making such a model work is complicated. Lithuania’s problem is that the passengers there look for cheap tickets, not suitable schedules. That of course gives budget airlines the advantage. It’s a different story with Latvia and airBaltic. Their expansion was a success because they weren’t as dependent on state aid as Estonian Air. The Latvians also have enough well-paying clients, and lots of routes to Western and Eastern Europe. It’s true that the poor economic status of Russia is also has an impact on Latvia and forcing airBaltic to review its routes. Establishing a joint airline is also complicated by the fact that both Tallinn and Rīga want to be hubs. It certainly wouldn’t work like that.

To read the original version of the published interview, please click here. 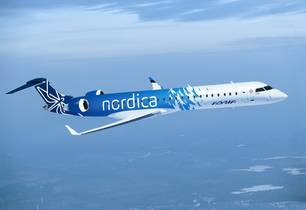