"Monitoring of Airport Operational Excellence through KPI Transparency” is the title of the speech by Lufthansa Consulting’s Partner and Head of Market South America, Liége Emmerz at the 7th Latin America Airport & Aviation Expansion Summit in Panama City, Panama on 14 November. Liége’s presentation reflects the current situation in Latin American aviation and focuses on airports’ performance and improving their operational excellence.

Also in Latin America growing passenger numbers result in capacity crunches at airports and in increasing airline departure delays and thus high cost for the airlines. Especially when it comes to analyzing root causes for operational disruptions, aviation managers are often confronted with a data black-box. There are various benefits of having operational transparency in order to tackle the data black-box. Making use of these advantages by implementing a tailored KPI dashboard can be the answer. Airports can steer their performance through the visualization of jointly defined and harmonized high level KPIs and possible analysis functions. Deep dives into the high level KPIs serve as a basis to improve the performance across all areas, in aeronautical or non-aeronautical revenues.

Airlines in Latin America transported close to 28 million passengers in 2018. The countries with the largest volumes being Mexico, Brazil, Colombia, Argentina, Peru and Panama. It is estimated that the airport sector in the region must invest 55 billion USD by 2040, due to air traffic projections and the lack of capacity in its main airports. These investments will focus on airport infrastructure, such as expansion, remodeling and modernization of existing facilities and construction of new airports. The aviation business in Panama generates 14.6% of the GDP and puts the country on rank number one in Latin America for aviation contribution to the GDP. The sector yields around 7,3 billion USD, and keeps generating jobs and opportunities for companies that want to venture into aviation. 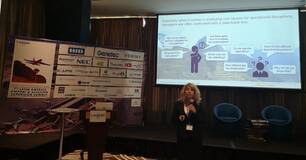