A good reason to celebrate: Four decades of experience in aviation

This year Lufthansa Consulting is celebrating its founding 40 years ago as a department of Deutsche Lufthansa AG. The German management consultants operate worldwide, providing specialist expertise in all areas of commercial aviation and offering a range of tailor-made services to airlines, airports and aviation authorities as well as to related industries and institutions. Lufthansa Consulting currently employs 100 full-time and freelance staff, and in addition to its headquarters in Frankfurt it has an office in Moscow and Rio de Janeiro.

Lufthansa Consulting has existed since 1976, initially as a department in Cologne, and in 1988 was set up as an independent subsidiary of Deutsche Lufthansa AG. While always focusing on developments in the aviation market, it has steadily expanded and extended the range of its consulting activities. What sets the company apart from its competitors is the way in which it supports its customers and helps them to implement solutions devised in projects. Among Lufthansa Consulting’s success factors are its activities on behalf of and in partnership with the Lufthansa Group. This involves an intensive exchange of personnel, resulting in practical, tried and tested recommendations, which are valued by customers.

In the early years, the main focus was on government-related, politically motivated projects, often in cooperation with the Federal Ministry for Economic Cooperation and the German Society for Technical Cooperation (GTZ), which is now known as the GIZ. In the 1990s, the company established itself as the leading aviation consultancy in the areas of restructuring and privatization, and successfully conducted major projects for airlines. In addition, since 2006, it has intensified its airport consulting activities. Between 2008 and 2012, complex airline and airport projects accounted for a large part of the company’s business, particularly in Africa and in the Middle East.

Since 2012, Lufthansa Consulting has strengthened its regional focus. With their specific market knowledge and, in some areas, a local presence, the managers responsible for the defined core markets have achieved even greater proximity to customers. The company has also boosted its support services for the Lufthansa Group and steadily expanded its internal consultation business. As one of its most important assignments, the company extensively supported the Group during the complex process of merging Lufthansa’s former Direct Services with Germanwings, and assisted in the reorganisation process.

In 2014, Lufthansa Consulting moved from its former headquarters in Cologne to the new corporate premises in the Frankfurt Airport Center, directly opposite Terminal 1. From here, Lufthansa Consulting has further intensified its in-house consulting services for the Lufthansa Group and assists Lufthansa German Airlines and other Group companies in the execution of numerous complex projects, e. g. in the Group-wide earnings improvement program SCORE and in the implementation of the resulting change processes.

In the same year, Lufthansa Consulting founded Lufthansa Consulting Ltda. (Limitada), a legal entity in Brazil, as the representative and operational base for its activities in South America. The opening of an office in Rio de Janeiro demonstrates the significance of this market for the aviation consultancy and reinforces the company’s close-to-clients philosophy.

At the beginning of 2016, the consultancy broke new ground. Lufthansa Aerial Services (LAS), a division of Lufthansa Consulting, and DJI joined forces to use the world’s leading drone-maker’s aerial platforms to develop commercial applications for drone technology. LAS is also involved in aviation-industry projects at and around airports and is being supported by Lufthansa Consulting’s know-how and expertise during the start-up phase. 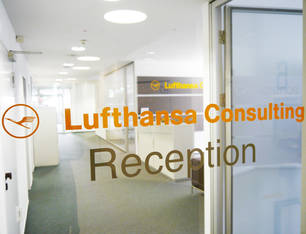